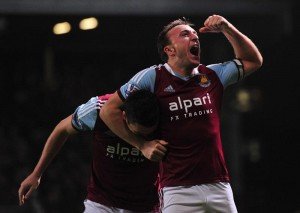 Mark Noble has totally shrugged off the Irons pre-season form and reminded fans: “I went through an unbeaten pre-season with Avram Grant and we all know what happened that year.”

And as he eyed a fourth win on the bounce over Tottenham Hotspur the midfield loyalist told the official site: “I thought we played really well against Sampdoria and it was nice to get the win.”

However, he insisted: “I’ve always said that the results in pre-season don’t matter and it’s the performances and getting the lads through it that’s the focus.

“I’m looking forward to Tottenham. I think it’ll be a harder game than the one we had here at the end of last season, but the atmosphere is always fantastic for the first game of the season.

“With them having a new manager, everyone will want to impress him, so everyone’s going to have to play as well as they did last Saturday for us and hopefully get the three points.”