Noble in Yarmolenko out as Moyes makes one change 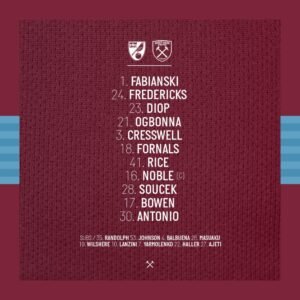 David Moyes has made one change to the team that lost against Burnley mid-week with Mark Noble replacing Andriy Yarmolenko who returns to the bench.  Haller is not deemed fit enough to start and remains on the bench.

Soucek will push up with Noble and Rice in front of the back four.

West Ham has not won at Carrow Road since 1973 but with Norwich not winning a Premier League game since 28th February will hope to break that 37-year record this lunchtime.

West Ham are unbeaten against the bottom six teams this season.