Mark Noble has urged the Hammers squad to be harder on themselves! 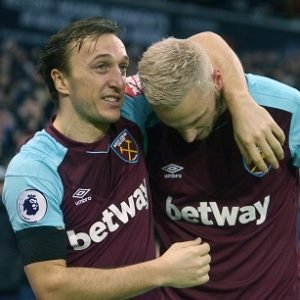 The captain was present as the Irons turned in an exciting but ultimately losing performance against Arsenal at the Emirates.

And he was not 100% happy with what he saw, insisting that the players must demand more of themselves if results are to pick up.

Writing for the Evening Standard, he said: “I’ve had a back problem which has kept me out for 10 days but I went with the squad to watch us play Arsenal. Afterwards I said to a few of the boys that we need to be harder on ourselves.

“No matter how badly Arsenal play, they are always going to create chances at home with the players they have. We had three or four really good chances in the first half and didn’t take them. If we want to go to the next level, we must make the most of our opportunities and demand more of each other.

“I don’t want us to play ‘basketball’ football, where we have a chance and then they have one — we took the lead against Bournemouth and Arsenal and lost both games — but we need to improve drastically because we’re conceding too many goals.”

The first chance to keep a clean sheet will come against Wolves this weekend.