Mark Noble admits he enjoyed an absolutely “lovely” day against Norwich on Sunday!

The Hammers were utterly dominant against the already relegated Canaries and turned in a highly impressive display. 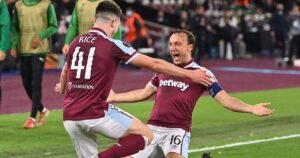 A brace from Said Benrahma, plus goals from Mikey Antonio and Manuel Lanzini gave the Irons a thorough 4-0 win over the soon-to-be Championship side.

Noble came off the bench to play the final 25 minutes of the game on his birthday, and was serenaded by the away end at Carrow Road, with chants of ‘Happy Birthday’ ringing out.

Noble admits it was a glorious day in the sunshine and he says that he thoroughly enjoyed his time on the pitch.

Per the club’s official website, the skipper said: “It was really nice to watch the boys, and especially to play 25 minutes myself – it was lovely.

“The game was already won by then so it was good to come on, get sung ‘happy birthday’ to by the fans – which was lovely – and enjoy 25 minutes of football.

“We had to get over the disappointment of Thursday’s UEFA Europa League loss quickly, because we knew we want to qualify for Europe again.

“Today was a really big game for us. We needed the three points – obviously with Wolves coming back and getting a point against Chelsea on Saturday, and Manchester United losing – so we just need to keep pushing.

“It’s the start of a massive week for myself, but I’m looking forward to it.”

Noble also claims that he predicted Benrahma’s strikes, telling the Algeria international that he would hit the back of the net as a birthday present for himself!

Nobes is no Nostradamus but we’re inclined to believe him, as he said: “I said to Saïd before the game “I think you’re going to score today” as a little birthday present for myself!

“After 12 minutes, he scored and came running over, which was nice!

“It was a good performance from the boys. In spells we didn’t play the best, I don’t think, but when you win 4-0 it’s pretty convincing.”

← Hammers get massive boost for City clash
Noble’s farewell – how do we get it right? →
Click Here for Comments >