Noble pulling all the stops out 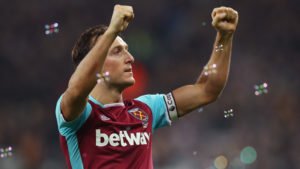 Mark Noble is desperate to play a part in the London derby against Spurs at the weekend and is rated at 60/40 to be involved at some stage.

The skipper is reported to be making decent progress and probably wants to play in this particular clash more than any other player in the squad.

West Ham v Spurs is seen as the game of the season among most locals and Noble is determined to ensure that he makes it for Saturday lunchtime.

We were told today on the phone by a source that the skipper is making good progress from the ankle strain he suffered during the defeat at Burnley.

And he added: “His enthusiasm to play a part is so infectious and anyone who knows Mark knows he is not a fella who will only play if he feels 100 per cent fit.

If he can get out there in any circumstances you can be assured he will be.“

One comment on “Noble pulling all the stops out”