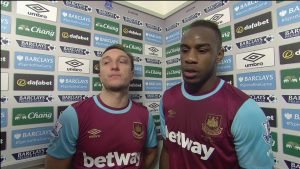 Mark Noble has claimed Michail Antonio has shown his fellow team-mates “disrespect” by failing to show up for a pre-match meeting on time. His late arrival meant the player was public dropped by David Moyes who explained his actions in the post-match press conference.

Noble said: “That’s the manager’s decision. It sets his stall out to say he won’t accept it, no matter who you are. He isn’t going to accept you being late, showing the lads disrespect. I’m sure Mikey did not mean it. I’m sure it’s a mistake. But when it comes to the position we are in the league, we need him, and we need him here in the team so that was the manager’s decision. He’s like that, and that’s the way he deals with things.”

Last night Moyes explained Antonio absence by saying “For disciplinary reasons he was not involved tonight. He turned up late this morning for a meeting and it wasn’t the first time. I’m not having it at the club, I’ve said right form the start what it’s going to be like. It’s too often so I didn’t involve him tonight, otherwise, I would have probably tried to get him on the bench. He’s apologised for it and because of that we move on. He’ll be back training tomorrow morning. On time!”

One comment on “Noble slams Antonio’s disrespect for team mates”