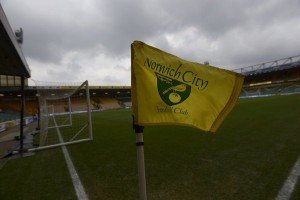 Five of the nine Premier League meetings between West Ham and Norwich have ended in a draw, with both sides winning two apiece. West Ham have not won on any of their last 16 league visits to Carrow Road (D7, L9). There has been a 90th-minute goal in the last four Premier League games between these two teams.

Norwich have lost their last five league matches and their last six in all competitions, conceding 19 goals. Only Sunderland have a worse defensive record than Norwich, who have let in 48 goals in this season’s Premier League. Seventeen of those goals against have come from set-pieces – more than any other club. The Canaries have conceded the first goal of the game on 18 occasions in the Premier League this season, the highest in the league.West Ham have lost their last two away league matches. 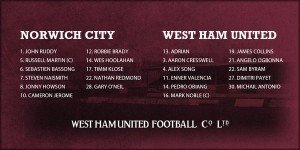 West Ham have lost their last two away league matches. The Hammers have been in the top half of the table all season. According to Opta, West Ham players have made a league-high 10 errors leading to goals in the Premier League this season. Finally, Dimi Payet has over twice as many goal scoring chances than any other West Ham player this season.

4 mins  All Norwich so far. They have come out fighting and West Ham are sitting back and defending so far.

7 mins Antonio is brought down just outside the six yard box to win a free kick. Payet takes the free kick but no connects with it.

9 mins Ginge has made his third clearance of the game as Norwich push hard. West Ham seem happy to counter on the break

10 mins Noble passes to Cresswell in the six yard box and Aaron blasts it way over the bar!

22 mins  Collins mistimed tackle after a poor pass from Antonio. Ginge is booked with a yellow and Norwich get a free kick in a dangerous position just outside the six yard box.

33 mins Naismith gets a yellow card for taking out Sam Byram. Another free kick

35 mins Bit of scrappy game so far with no one dominating. West Ham have 49% of possession West Ham

40 mins  James Collins seems to be defending the Norwich attacks on his own. He is clearing ball after ball.

41 mins  Another Payet free kick as West Ham fans sing his name but Ruddy catches it before Antonio can get his head on it.

45 mins Three minutes of added time until Half time

45+3 Mins Half time Norwich 0 West Ham 0. A better team would have punished us in the first half. 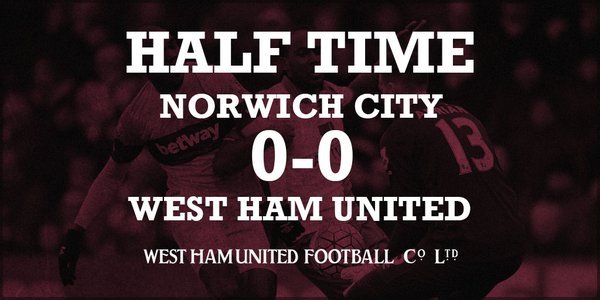 46mins Second half kicks off  Come on you irons!

49 mins  Dangerous moment when Byram swings out and misses his clearance. Luckily Norwich did nothing with it

52 mins Horrendous mistake by Ginge as he gives away the ball to Norwich, Ogbonna to the rescue with a great tackle

54 mins Antonio gives away the ball cheaply and Brady scores for Norwich in top right hand corner. West Ham one nil down!

58 mins Valencia is down injured and requires treatment

64 mins West Ham two nil down now. Mark Lawrenson must be smug right now! Back day at the office 🙁

68 mins Antonio is having a very poor game today. At fault for the first goal and misses a one on one chance to get one back

69 mins  It seems Bilic agrees as Antonio is subbed off to be replaced by Emenike. Let’s hope this game doesn’t knock Antonio’s confidence. 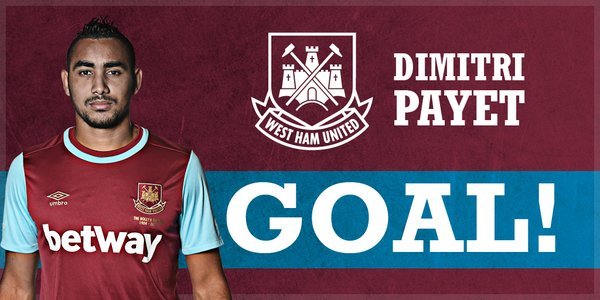 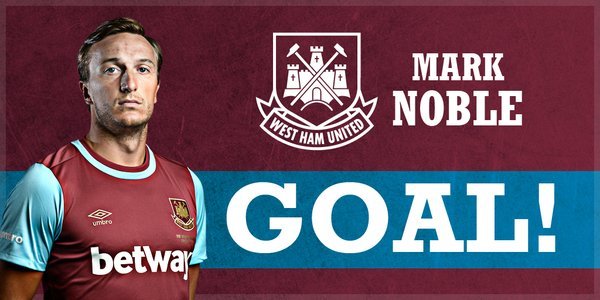 81 mins  Obiang makes a perfect tackle but the referee gives a free kick just outside the six yard box. Obiang already on a yellow

88 mins  Attendance given out at Carrow road and there are 2,645 Hammers there to support the boys!

89 mins What a miss by Emenike to win the game! Greta header by Carroll but Emenike fumbled it in front of goal

90 mins  Five minutes of added time to win this. Payet awarded man of the match!

91 mins Free kick for West Ham for Payet to take 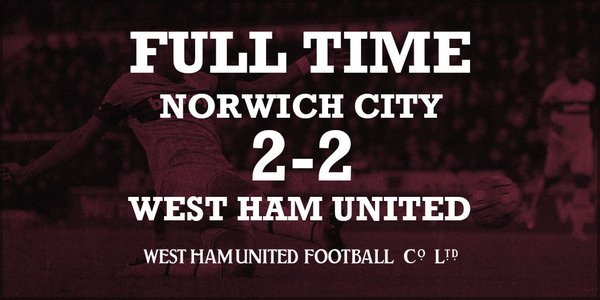