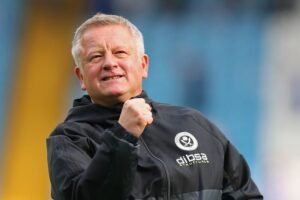 Sheffield United’s players have agreed a wage deferral until the end of 2020.

The Blades’ playing squad have followed the lead of manager Chris Wilder, his backroom staff and the club’s chief executive Stephen Bettis in accepting terms on holding part of their wages and bonus back during the season’s interlude.

Bettis said on the club’s official website: ‘This announcement follows positive and constructive discussions throughout the club, taking into account the severity of the situation that the country finds itself in at the moment.

‘I am pleased that we have reached an agreement with our first-team players, manager and backroom staff to help support the club.

‘It is a difficult period for everyone, but our football club also needs to be taken care of and I’m delighted that the players want to mirror the gesture of Chris and the staff by contributing, it confirms that they care about Sheffield United.

‘The players should be commended, not only for this action, but also for their role in the #playerstogether initiative with other Premier League clubs.’

Speaking after he and his coaching staff had initially accepted terms, Wilder said: ‘It is a difficult time for everyone and that includes football clubs and this particular measure is all about our football club.

‘I’ve had similar experiences of cash flow problems at other clubs and I’m delighted that my staff have supported me in assisting our club in a small way.’