Posted by Sean Whetstone on April 2, 2014 in Whispers 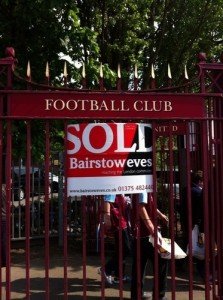 West Ham have finally stuck two fingers up at Spurs after it emerged they tried to buy our hallowed Boleyn Ground.

A  senior source close to the bidding process confirmed to ClaretandHugh that the story carried in the Daily Mail yesterday is no joke and 100% true.

I understand the West Ham board decided to accept a lower bid from Galliard Homes rather than allow Spurs play one season at our historic ground after planning delays look likely to delay their own stadium rebuilt project.

Our Upton Park source revealed exclusively: “The request was very real but there was no way that was going to happen as far as we were concerned.”

Spurs initially bid for the Olympic Stadium before a so called ‘anonymous’ complaint to the European Union caused the process to collapse. Spurs welcomed that decision when the first deal collapsed.

Last year three men, including an investigator who worked for a company hired by Spurs during the contested battle for tenancy of the Olympic Stadium,  pleaded guilty to unlawfully obtaining the phone records and bank statements of West Ham vice-chair Karren Brady and others.

After all the bitterness of the Olympic Stadium bidding, White Hart Lane chairman Daniel Levy has some real cheek trying to buy the Boleyn Ground.

And I’m thrilled to bits the West Ham board drew a line in the sand by putting our history over money when deciding the famous old home’s destiny!