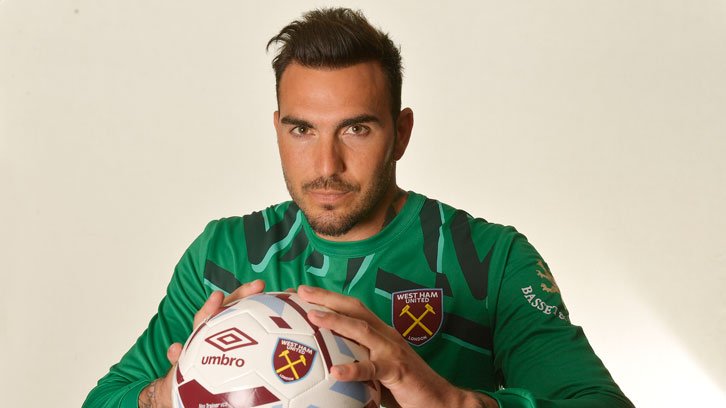 West Ham have confirmed the signing of Spanish goalkeeper Roberto on a free transfer.

The experienced 33-year-old will join the Hammers on 1 July, after his contract with La Liga club Espanyol expires, on a two-year deal with the Club having the option for a further 12 months.

Roberto, who has played more than 300 senior matches in Spain, Portugal and Greece, winning six trophies and appearing in the UEFA Champions League, is looking forward to a new challenge with the Hammers.

“From the beginning when I knew I was going to come here, I was very excited about the new experience,” said the stopper speaking to WHUFC.com, whose full name is Roberto Jimenez Gago. “I consider this step a big step in my career. I think everyone who follows football knows the importance of this Club, so I’m really excited.

Director of Football Mario Husillos is familiar with Roberto’s work and believes West Ham have signed a top goalkeeper.

“I worked with Roberto during my time at Malaga,” he confirmed. “He is a fantastic goalkeeper, who has a great deal of experience in football, having played at the highest level. During his time at Olympiakos, I spoke regularly with the coaches and many of them spoke about Roberto as one of the biggest goalkeepers in the history of the club.

“He is at a brilliant age for a goalkeeper, and we are extremely happy to bring him to West Ham United. He is a brilliant professional and a brilliant person. He has all the qualities to play in the Premier League and be very successful.”

Roberto is reported to have earned 11,000 Euros (£9,750) per week at Espanyol meaning his contract with West Ham could be very reasonable indeed compared with the £50,000 per week paid to Adrian.  Son of Alvin Martin, David is still expected to join West Ham on a free transfer as the third choice keeper in the coming weeks.  Nathan Trott is expected to be loaned out to a Championship club.

← The big question: Who DON’T you want to win
Poll: How much should Hammers bid for Andre Gomes? →
Click Here for Comments >