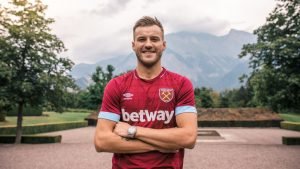 The 28-year-old forward has joined the Hammers from Borussia Dortmund on a four-year contract for a fee believed to be around £17.5m.

Yarmolenko has enjoyed a hugely successful career with Dynamo Kyiv and the Ukrainian national team, scoring more than 175 goals and registering well over 100 assists, being voted Ukrainian Footballer of the Year on no fewer than four occasions.

The fifth signing of the summer told WHUFC.com “Of course, I am very happy to sign for West Ham United, West Ham is a big club with good fans and I am happy to come to play in the Premier League.

“The Premier League is the best league in the world and I know that an interesting project is being built here at West Ham. The team wants to achieve high things and I am excited for this challenge.”