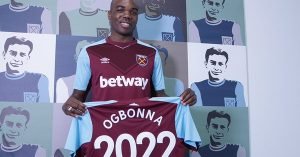 Angelo Ogbonna has been voted the Claret and Hugh man of the match with an average score of 7.84

With over 350 readers voting in the West Ham player ratings Jeremy Ngakia was voted second with a  score of 7.62 with  Issa Diop third on 7.52. Declan Rice was the only other seven score with rating of 7.31 out of ten.

Top of the sixes was Michail Antonio with an average score of 6.97 followed by the injured Tomas Soucez with a score  of 6.83. Robert Snodgrass was not far away with a score of 6.8 with goal scorer Pablo Fornals on 6.75.

Top of the fives was Jarrod Bowen with an average score of 5.86 followed by Felipe Anderson on 5.86

Readers voted the two worst players as Seb Haller on 4.84 and a bad performance from Fabianski earning his the bottom score of the game of 4.16.