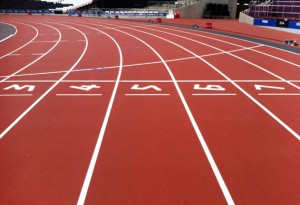 Gabby Roslin on BBC1 coverage of the Sainsburys Anniversary games confirmed that the running track  within the Olympic Stadium is to be ripped up & replaced with a new blue one next year.

The original London Olympic 2012 running track was buried under tons of earth during the £272m reconstruction as a multi purpose Stadium only to recently unearthed, cleaned up and re-furbished for the diamond league athletics meeting this weekend.The 2012 track was designed and laid by Mondo, an Italian company that has provided all the tracks at the main Olympic stadiums since the 1992 Games in Barcelona. So much for the Athletics legacy.

Maybe the new running track would look better with alternative lanes in Claret and Blue. Hammers fans need not worry though, as revealed earlier on Hugh and Claret, the parts of the running track not covered by retractable seating in football mode will be hidden by artificial turf so I guess we don’t care what colour it is or what they want to do with it.

UK Athletics are contributing just £1m to stadium rebuilding costs compared to West Ham’s £15m. It understood they will pay no rent but will share revenue with the stadium operators Vinci on ticket sales.