Other European leagues to restart in June 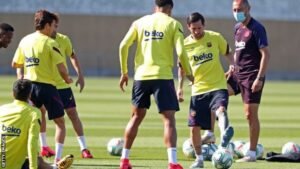 La Liga players this week started training in groups of no more than 10.

“Spain has done what it should and now new horizons are opening for everyone. The time has come to bring back many day-to-day activities,” said Sanchez.

“From 8 June, La Liga will be back. Spanish football has a huge following but it will not be the only recreational activity that will return.”

The Spanish second division is also set to resume at the same time as the top flight, with reports in Spain suggesting the derby between Sevilla and Real Betis will be the first La Liga game to take place. We are very pleased with the decision,” said Tebas. “It is the result of the great work of clubs, players, coaches, CSD (National Sports Council) and agents.

“But we cannot lower our guard, it is important to follow health regulations and ensure the pandemic doesn’t come back.”

Football in Spain was suspended on 12 March.

The players in the top two divisions were only able to return to individual training in early May after being tested for the virus.

Five players tested positive for the virus across Spain’s top two divisions and went into isolation prior to the first phase of group training being allowed from 18 May.

La Liga teams have 11 games to play this season, with leaders Barcelona two points ahead of Real Madrid at the top of the division.

German’s Bundesliga became the first European league to start in May with the French, Dutch and Belgium are cancelling the end to their leagues.

Italy: There is still doubt over whether Serie A can restart, with government ministers, the Italian federation, the Serie A league and clubs all giving conflicting information. Teams are training again from this week but the main sticking point is the Italian federation’s medical protocol – described as “insufficient” by sports minister Vincenzo Spadafora. Tensions between Spadafora and the clubs have grown in the last week.

Switzerland: The government has given permission for training from May 11 and matches to re-start on June 8. However, the football league said there were still numerous financial and health issues to be resolved.

Austria: One of the first countries to allow training, the league now says that the government’s health guidelines – under which a whole team must be quarantined if a single player tests positive – make a restart unlikely.

Sweden: Sweden has avoided a full lockdown and many teams are already back in training. Play could restart on June 14th.

Poland: The league has announced that it will restart on May 29.

Hungary: The football association restarted on Saturday, May 23 with two cup ties and a league game.

Serbia: First- and second-division clubs resumed training with competition expected to resume in late May or early in June.

Croatia: Champions Dinamo Zagreb and the other nine top-tier clubs were allowed to resume training on April 27 with the date of a return to action yet to be announced.

Denmark: The country’s FA is waiting on the Danish authorities to give them permission to resume competition.

Norway: The government is due to announce whether football can resume and if so under what circumstances.

Finland: Teams have been given permission to train again, although the Finnish FA has been criticised for some of its safety guidelines which have been described as “hazy” by one club director.

Ireland: The Football Association of Ireland (FAI) is currently awaiting a green light from the country’s Health Service Executive and the league hopes to start in June.