Posted by Sean Whetstone on August 5, 2021 in News, Whispers 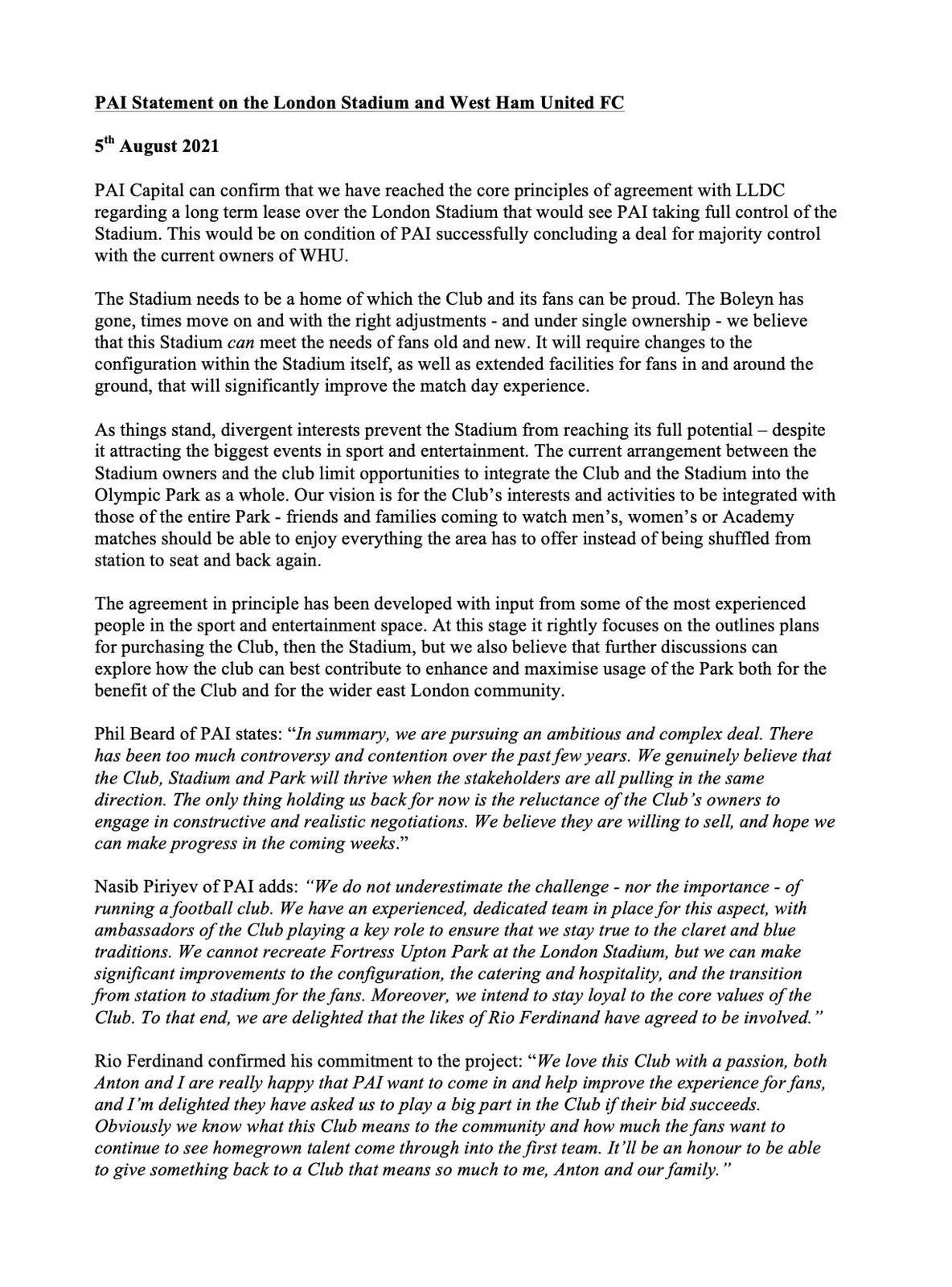 The statement in full:

PAI Capital can confirm that we have reached the core principles of agreement with LLDC regarding a long term lease over the London Stadium that would see PAI taking full control of the Stadium.

This would be on condition of PAI successfully concluding a deal for majority control with the current owners of WHU. The Stadium needs to be a home of which the Club and its fans can be proud. The Boleyn has gone, times move on and with the right adjustments – and under single ownership – we believe that this Stadium can meet the needs of fans old and new.

It will require changes to the configuration within the Stadium itself, as well as extended facilities for fans in and around the ground, that will’significantly improve the match day experience. As things stand, divergent interests prevent the Stadium from reaching its full potential – despite it attracting the biggest events in sport and entertainment. The current arrangement between the Stadium owners and the club limit opportunities to integrate the Club and the Stadium into the Olympic Park as a whole.

Our vision is for the Club’s interests and activities to be integrated with those of the entire Park – friends and families coming to watch men’s, women’s or Academy matches should be able to enjoy everything the area has to offer instead of being shuffled from station to seat and back again.

The agreement in principle has been developed with input from some of the most experienced people in the sport and entertainment space. At this stage it rightly focuses on the outlines plans for purchasing the Club, then the Stadium, but we also believe that further discussions can explore how the club can best contribute to enhance and maximise usage of the Park both for the benefit of the Club and for the wider east London community.

Phil Beard of PAI states: “In summary, we are pursuing an ambitious and complex deal. There has been too much controversy and contention over the past few years. We genuinely believe that the Club, Stadium and Park will thrive when the stakeholders are all pulling in the same direction. The only thing holding us back, for now, is the reluctance of the Club’s owners to engage in constructive and realistic negotiations. We believe they are willing to sell, and hope we can make progress in the coming weeks.”

Nasib Piriyev of PAI adds: “We do not underestimate the challenge – nor the importance – of running a football club. We have an experienced, dedicated team in place for this aspect, with ambassadors of the Club playing a key role to ensure that we stay true to the claret and blue traditions. We cannot recreate Fortress Upton Park at the London Stadium, but we can make significant improvements to the configuration, the catering and hospitality, and the transition from station to stadium for the fans. Moreover, we intend to stay loyal to the core values of the Club. To that end, we are delighted that the likes of Rio Ferdinand have agreed to be involved.”

Rio Ferdinand confirmed his commitment to the project: “We love this Club with a passion, both Anton and I are really happy that PAI want to come in and help improve the experience for fans, and I’m delighted they have asked us to play a big part in the Club if their bid succeeds. Obviously, we know what this Club means to the community and how much the fans want to continue to see homegrown talent come through into the first team. It’ll be an honour to be able to give something back to a Club that means so much to me, Anton and our family.”

Claret and Hugh say: PAI Capital have released their statement on their proposed West Ham United takeover and there is further confusion with their words and no financial details. So they have an agreement to take over a stadium losing £30 million a year but fail to explain how much they will be offering for the club and how much they intend to put into it. Doesn’t amount to much as it stands. The private equity firm claims they have reached an agreement with London Stadium owners (London Legacy Development Corporation) over a long term lease for the stadium on condition PAI successfully conclude a deal to buy the football club. They also appear to be suggesting they would also lease the Queen Elizabeth Olympic Park in addition to the Stadium. The statement lacks any numbers or any real detail or how much investor money they have to spend this ‘ambitious and complex deal’ to use their words. Another surprise has been the announcement of the Ferdinand brothers Rio and Anton backing the bid with Rio giving a quote to the press statement. Ex QPR CEO Philip Beard and PAI founder Nasib Piriyev also give quotes putting their names to the latest of a takeover approach played through the media instead of lawyers. All very bizarre and odd.

← Replacement for Hammers target already identified
West Ham is not for sale! →
Click Here for Comments >