Palace may be set to move on Hammer 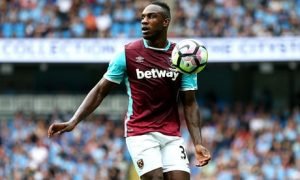 Crystal Palace are maintaining their interest in a winter move for Michail Antonio.

Palace have made an indifferent start to their campaign and boss Roy Hodgson is a long term admirer of the player who is now no longer a regular first team starter at the Hammers.

Manuel Pellegrini is not keen to sell any of the squad this winter but Hodgson and Palace need to beef up their squad and Antonio has been on their agenda for months.

After five defeats in eight games,  the pressure is building and with a midfielder, left back and possibly goalkeeper required in January the Irons may be tempted to do business.

However, a loan move for Antonio with an option to buy at the end of the season remains a possibility with the cub receiving a loan fee for the former Hammer of the Year.

← ‘Cottee to McAvennie, well would you believe it, that’s four’
Keegan on West Ham partnership that never was →
Click Here for Comments >

One comment on “Palace may be set to move on Hammer”