Palace perspective needed as Yarmo looks to follow up 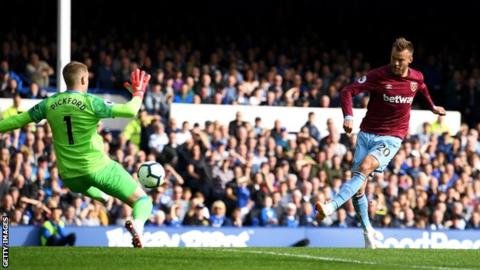 Yarmo grabbing one of his two goals at Everton last season

We are about to find out whether we all over reacted somewhat to the Palace defeat.

In his latest interview Angelo Ogbonna drew attention to the depth teams are defending against us in a new interview on the official site – that’s a compliment to the way we have been playing.

It was very much  in evidence against Roy Hodgson’s outfit before they took advantage of a couple of set pieces on a day when admittedly we weren’t at our best.

But to get some perspective on our form, it’s a realistic idea to look back over the last 11 game since the end of last season which sees us winning six, drawing three and losing two.

Along the way we have played football which has improved almost game on game with Norwich City and Watford being highlights.

Our battling qualities have also been very much on display against Villa and Bournemouth in particular and Saturday is the perfect chance for us to get things back on track.

Every team is allowed one average to poor performance but I have no doubt Manuel Pellegrini has been bellowing the big team mantra at the lads over the last week or two.

We expect a reaction and I believe we will get one. And let’s hope Yarmo is in the same sort of form as last season when he grabbed a brace in the 3-1 win.