Payet would not be banned from UK 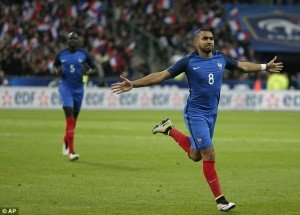 A misinformed piece in the Daily Mirror has suggested Dimitri Payet would not be able to play for West Ham if the UK were no longer part of the European Union.

The article by Joe Mewis says: “Britain goes to the polls on June 23 and a Brexit vote could radically change the face of the Premier League. Anthony Martial, Dimitri Payet and N’Golo Kante would not have been able to play in the Premier League this season, if the UK had not been part of the EU.”

“A Brexit could mean that more than 400 players would lose the right to play in the UK, according to a study from the BBC .Under current employment rules, any player with an EU passport is free to play in the UK without restriction, while those from outside Europe must meet specific Home Office criteria which depends on how many international appearances they have made and where their county sits in the FIFA rankings.”

“That would mean West Ham playmaker Dimitri Payet and Leicester midfielder N’Golo Kante would not have met the criteria, as they were yet to make their international debuts when they arrived in the Premier League this summer. Payet and Kante both made their France debuts during the international break, but a player from a top 10 nation must have played in 30% of their games over a two-year period in order to qualify for a work permit.”

West Ham season ticket holder, George Bucci contacted Claret and Hugh to point out that Payet has 17 international caps in total for France, 15 of which were gained before he joined the Hammers last summer.

He was called up for the senior national team for the first time by Laurent Blanc for the Euro 2012 qualifying matches against Romania and Luxembourg and made his debut in the former on 9th October 2010, coming on as a substitute for Karim Benzema in the 86th minute and assisted Yoann Gourcuff’s goal to make it 2–0.Three days later, he came on for the last 30 minutes against Luxembourg and again assisted Gourcuff for a goal.

Work permit rules for the Premier League say the player’s country must be at or above 70th place in the official FIFA world rankings when averaged over the two years preceding the date of the application. France currently rank 24th in the world but were ranked 7th in 2014.

Although it is true that Payet has not played 60% of his country’s competitive matches during the two years preceding the date of the application he would almost definitely be permitted on the exceptional talent criteria. He played 10 international matches between 2014-2015 with another two this year.

You can safely vote which vote in the BrExit election in June which ever way you want knowing it won’t remotely affect on Dimitri Payet’s ability to play for West Ham.

11 comments on “Payet would not be banned from UK”