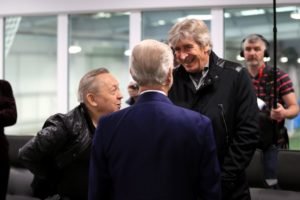 West Ham’s hunt for new signings this winter will be conducted via  a much closer relationship between the management team and the board.

Manuel Pellegrini and Mario Husillos have had an entirely free hand in the transfer market this summer with the board ignoring its power of veto.

However, the arrival of such as Roberto and Pablo Fornals may see David Gold and David Sullivan looking much more closely at incoming players.

Both Husillos and Pellegrini remain on safe ground for now but another defeat on Saturday could concentrate minds and the Director of Football’s recommendations in the winter window could define his ongoing position at West Ham.

The board has taken a step back with the appointment of the managerial duo and whilst they are still backing the pair they are as determined as they can be that no further high profile errors are made as we approach what could be a critical window.