Pelle ponders defensive issue – is this the answer? 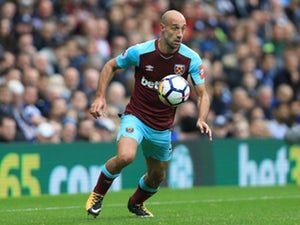 Manuel Pellegrini’s left back issue against Manchester United may not cause him as many concerns as some of us may have imagined!

The absence of Arthur Masuaku because of suspension has caused a few creased brows but given that the not so quick Mata is United’s usual right sided player, we may well get away with it for this game.

It could easily be that the boss shove Zaba into the job as it doesn’t look likely the Spaniard will be racing beyond even our 34 year old defender.

There is of course the worry that Marcus Rashford has been drifting wide to the right this season but not to the extent that needs necessarily to cause GREAT concern.

And it won’t be rocket science to the United manager that if there is a weakness in our defensive set up  it’s over on that side of the back four.

Aaron Cresswell will of course have everything crossed that he will get the gig for a game where his defensive abilities don’t get tested to the limits but Zaba looks the possible answer.

And of course as a former Man City man he likes nothing more than to put it across the Reds who at the moment probably aren’t entirely sure of their ideal line up.

This may also be a game for Pablo Fornals to step up for  Andriy Yarmolenko who didn’t look at his best at Aston Villa on Monday evening.

Beyond that isn’t it nice to see the team virtually picking itself?

Give us your teams here https://www.claretandhugh.info/select-your-starting-west-ham-x1-against-man-utd/

12 comments on “Pelle ponders defensive issue – is this the answer?”