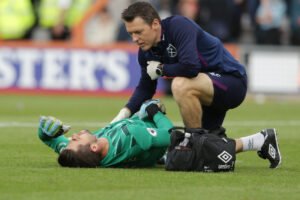 West Ham Manuel Pellegrini has given an update on Lukasz Fabianksi telling reporters at Rush green this lunch time that his number one goal keeper will probably be out for the rest of the year and that we need to be patient with his recovery.

Pellegrini told press at the Everton pre-match press conference “Lukasz had his surgery last Saturday, we must be patient. As we said at the beginning, he will probably return next year.”

Hammers medical staff waited until swelling subsided on the keepers tear to his thigh before deciding when he could undergo surgery with the 34 year-old going under the knife last weekend.

The Hammer of the year suffered the injury taking a goal-kick during West Ham’s 2-2 draw at Bournemouth on 28th September to be replaced by Roberto.

The latest update from the manager confirms the keeper will be out of action for a minimum of three months as first reported by Claret and Hugh with a target return date of January 2020.