Pellegrini not off to Barcelona, Sevilla or Plymouth! 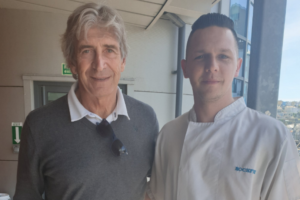 Manuel Pellegrini has been linked to a move to Barcelona, Sevilla and Plymouth this week as the silly season kicks in.

Stories in Pellegrini’s native Chile have linked the manager to a move to Barcelona or Sevilla this summer. Sources close to the coach quickly denied the claims to the Daily Mail categorically saying he has no intention of leaving the club he took over last summer.

Sevilla wanted Pellegrini 12 months ago and now find themselves looking for a new manager again with caretaker boss Joaquin Caparros not likely to remain into next season. Barcelona manager Ernesto Valverde is also under pressure after their humbling at the hands of Liverpool in the Champions League.

Perhaps the most ludicrous story comes from Plymouth with one local paper suggesting Pellegrini was in town as a candidate for the Plymouth job. The 65-year-old was photographed with a chef at the Rockfish restaurant in Brixham and was seen by many strolling around the town taking in the sea air.

5 comments on “Pellegrini not off to Barcelona, Sevilla or Plymouth!”