Pellegrini short on words of comfort 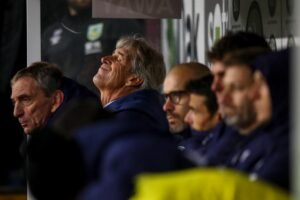 The gaffer was in no mood to sling it out with reporters beyond his contractual obligation.

Pellegrini told the media “I think it is difficult to analyse that performance. We conceded goals but we tried to play. The other team scored goals that are not made.”

Asked about his team weakness in defending set-pieces the 66-year-old said “Yes it is one of the big problems that we are having. We conceded the first goal from a corner that wasn’t a corner and it’s a refereeing mistake. When you concede from set pieces it is a concern about why we are doing it. There are so many distractions. Newcastle and Crystal Palace was the same but after that we tried to play in the way we expected.”

The manager added:  “When players are not in their best moment then of course I worry about that. But he has experience so we will see after that”

Reminded that his team was winless in seven games the Chilean finished his interview by saying “Of course when you have six or seven games without a win you are concerned. You never know in this league which games are most difficult. We need to try to work harder. I hope that in these 15 days we work and see what happens after.

3 comments on “Pellegrini short on words of comfort”