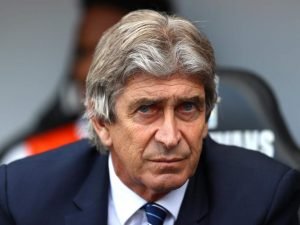 Manuel Pellegrini has told Sebastien Haller he has to improve despite him scoring four goals this season.

Haller has scored against Watford, Norwich and Crystal Palace despite often looking isolated and being forced to concentrate on hold up play rather than being offered the chance to get on the end of things in the box.

Despite the vast majority of fans believing he has been one of the manager’s best buys and worthy of his price tag Pellegrini wants to see more from the Frenchman.

Asked for his thoughts on his start to the season  at today’s presser ahead of the Sheffield United game he said: “I think that he is not doing bad but I think he can do better also.”

“It is always difficult for different players to come from another league and start here.

“He has started better maybe than we expected, now he must make more movements in the box for the way we play because we need to score more goals.”

ClaretandHugh says: Sorry, can’t make much sense of that as it asks a huge – perhaps an impossible amount – of  a player who has often received next to no service  from a misfiring midfield over the last couple of games whilst not enjoying the presence of a close-up No 10. There almost seems to be a resistance from the manager to accept that the area of the pitch on which he  has spent so much time and money is currently not working. In the circumstances it’s difficult to understand how Haller could offer much more than we have already seen and maybe the remarks should have been equally spread between him and those who are supposed to be assisting his strike rate.

← Poll: What will the result be against Sheffield United?
Grit needed to blunt the Blades →
Click Here for Comments >