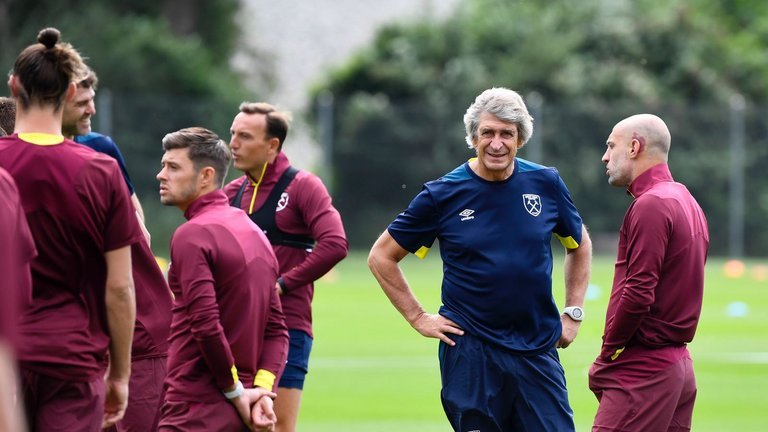 The manager reckons he will sort things out with the players over the next 14 days!

The guff that comes out at post match pressers is often frightening and once again Manuel Pellegrini has demonstrated an amazing ability to demonstrate precisely that!

After another horrendous display yesterday which prompted Declan Rice to say the players can even pass accurately over 4 or 5 yards, the manager had his own take on things.

Rather than address those very obvious worries he instead decided to declare that the international break has come at the right time.

Our view? It’s never the right time to have an international break. We’ve had two already and they are the boredom from hell periods of the Premier League season!

However, he appears to believe that ” we need to work very hard and review this situation ” – words  very similar to those we have heard far, far too many times before!

Quite whether we are expected to believe that so many wrongs will be put right in a fortnight is debatable. Anyway – here’s what he had to say:

“I think it’s a good time for a break. We need to work very hard and review this situation. Maybe last season was different but we had less points than we have [at the same stage] this season, so I hope we are going to return to a normal level of performance as soon as possible and produce a good performance next time.

“Of course, we are in a very different moment [from the opening six games of the season, when we collected eleven points], but you need to perform as a team.

At this minute, a lot of players are not performing but we have 15 days and we will try to recover, not only in [terms of] the result but in the trust we are demonstrating in each other.

“It’s about more than confidence; it’s because we are conceding too many goals. If you look at the three goals we conceded against Newcastle, it was because we didn’t concentrate and the result in the Premier League is decided by one or two points that decide the game, so if you concede so many easy goals, it is very hard to win.”

It actually maes you wonder quite what the point of press conferences are!