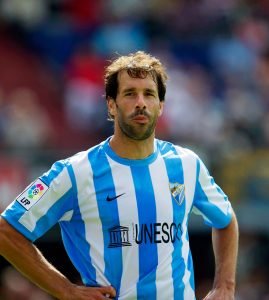 RVN – pictured in Malaga strip during his last season in the game.

Manuel Pellegrini is stoking up the pressure on the Hammers board to spend big and there’s absolutely nothing wrong with that – in fact it’s exactly what he should be doing!

Every good manager makes sure he’s bang in the faces of the people who hold the purse strings – it’s what they do from Guardiola downwards. It’s their job and good on him.

However, I was interested when I saw his quotes yesterday which at one point suggested he wanted Sullivan and Gold to adopt the model he had employed at Malaga when signing Ruud van Nistlerooy after it became clear this time he wants Javier Pastore.

His argument is that top players attract other top players which on the face of it sounds a pretty sound level of reasoning.

ClaretandHugh Facebook group member Alan O’Brien pointed out, however, that the sets of circumstances were entirely different to what he did then and requires West Ham to do now.

So as is my habit on such occasions I took a look at the the positions surrounding the two players and whether there was a sensible comparison to be drawn.

van Nistlerooy – great player though he had been – arrived at Malaga towards the very end of his career, aged 35.

He signed a year’s contract having become a FREE agent from Hamburg, was greeted by 15,000  fans after agreeing  another 12 month deal and scored four goals in 28 games.

It was his last club in a distinguished career but it’s doubtful – at best – that other big names were seriously impressed.

Well done Manuel for hyping it up a bit but I have no doubt you are allowing yourself  a wry smile !