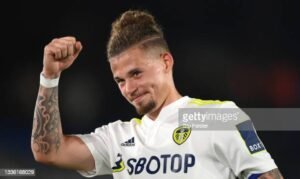 Kalvin Phillips will again be a target for the Hammers when the summer window reopens but it seems the defensive midfielder remains keen to stay at Leeds.

And his agent Kevin Sharp has cleared up some misapprehensions among fans as to what went on in the transfer window when the Hammers tried to sign him.

Many believed because they only heard of as bid on the final day that was the ONLY bid but Sharp has made it clear that was not the case.

The Hammers explained to Claretandhugh that they tried to get him away in the winter knowing that various big clubs would be moving in the summer.

According to the Daily Star the Hammers made three bids for the England player and Sharp confirmed that when saying: “Kalvin was pleased that Leeds turned those offers down.”

But in  statement that will disappoint the Hammers he added: “He has never asked to leave Leeds in all his time with the club and has no intention of doing that now or in the summer.

“But I understand the offer that was turned down would have been a record for both buying and selling clubs.”