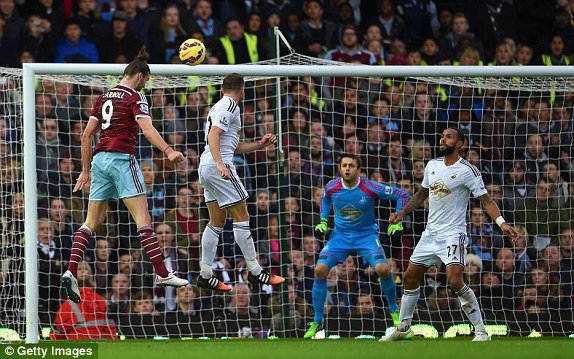 It’s been a long time coming but more than worth the wait!

Andy Carroll’s first league goal of the season was a majestic header which had goal written all over it from the moment it left his forehead.

But we must pay tribute to Carl Jenkinson who picked things up on the right wing and watched as the big lad tracked back to the far post before delivering a magnificent cross from which Carroll left keeper Fabianski helpless as the ball looped back over his head.

Wilfried Bony had opened the scoring for the visitors with a goal perhaps as classy but entirely different, finishing off a move involving Montero and Sigurdsson.

But that Carroll equaliser will live long in the memory as will the on loan Arsenal defender’s cross.

← Sam: “It could have been the end for me”
How the IRONS rated →
Click Here for Comments >