Pink shirts sold out for cancer 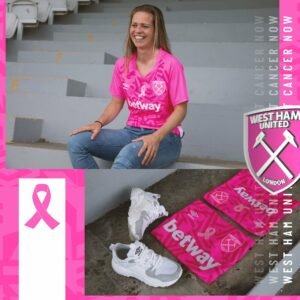 The limited-edition Pink shirts launched by the West Ham women to raise awareness for breast cancer have sold out in record time.

Thedowside is  they will not be returning back into stock despite demand by some supporters still wanting the shirt.

Umbro insists on a substantially high number as a minimum order for any batch of shirts to be made and the club are not convinced they would sell out a second batch so easily as the first.

Breast Cancer Awareness continues for the whole of October and despite selling out of shirts the club will be continuing to support the charity in other ways including bucket collections at home games.

West Ham have promised to donate all profit from sales of the Pink shirt and with the club usually making around £10 profit on a £55 shirt, the cancer charity should receive a donation worth thousands of pounds from the sold-out pink shirt.