Pitch invader still has a price to pay

Posted by Sean Whetstone on September 3, 2014 in Whispers 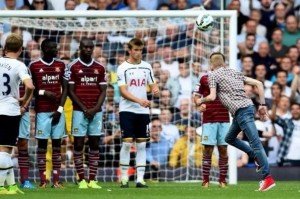 West Ham fan Jordan Dunn was spared a football banning order by a Judge earlier this week and now it appears generous Hammers fans have paid his £305 fine.

Using a website called  GoFundMe.com Jordan raised £305 from 37 fans in little over 24 hours!

However Amanda Jacks from the Football Supporters’ Federation insists he didn’t get away scott free by commenting  “Before a court issues a Football Banning Order they have to be satisfied that doing so will help to prevent football related violence or disorder.

In this case, while Mr Dunn’s actions are not to be condoned or encouraged it would seem that the Judge understood there were no malicious or violent intentions, hence not granting the application.

There may well be a perception that Mr Dunn has ‘got away’ with his actions, but this isn’t the case.  He now has a criminal record and may suffer personal or professional implications because of that.”