Players to step up training at Rush Green “hospital” 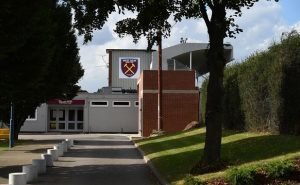 West Ham’s squad will get down to more serious business tomorrow morning (Mon) when they return to Rush Green for training.

For the first time they will split into groups of four or five although no contact will be allowed with passing and movement top of their agenda.

With a June 12th start envisaged for the League’s resumption, there is going to be a marginal stepping up in the training regime as the boys prepare for their their return to action .

David Moyes had hoped for an intensive month’s training but he’s certainly not going to get that and even if the government’s ease on lock down goes to plan, the best that can be expected in a week before the first game – or maximum of two if the date is pushed back.

Meanwhile a club insider told ClaretandHugh: “Rush Green looks and feels more like a hospital than a training centre.

There are hand sanitizers everywhere, two metre markings on the floor every where you go with the players receiving regular tests for the bug almost every day.

It’s all ready and the precautions and measures that have been taken can only help confidence among the players to resume their business.”