CandH’s PlayerWatch reporter Danny Danielli Leach kept a very careful eye on Michail Antonio against Watford as the big fella continued his recovery after a long injury absence.Here’s his every touch over the 90 minutes. 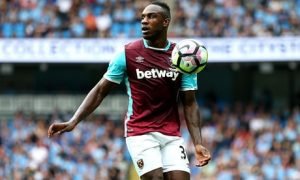 27 – Picks the ball up on the half way line and takes a very huge touch in front of him when dribbling. But he should have got a free kick when trying to recover the ball at the goal line as he was pushed. Instead a Watford throw in was awarded

33 – With the drop of a shoulder, Deulofeu sends Antonio to the floor. Zabaleta breaks up the attack

37 – GOAL – Picks up the ball on the half way line and dribbles forward dropping his shoulders and carrying out step overs to beat Janmaat. He crosses the ball in with his left foot and Chicharito’s head is there to meet the ball at the back post and make it 1-0 to the Hammers

66 – Deulofeu beats him to a thrown in ball

Verdict – 7.5 – Antonio was back in the team and did not show any signs of a rusty player. He caused problems at left wing back to Janmaat the whole match using his strength and running up and down the wing tirelessly but faded in the 2nd half as he dropped deep as part of Moyes game plan to close the game while defending superbly. As well as providing the assist for our first goal, Antonio will be very pleased with his comeback today.