Poll: Andy Carroll: Should he stay or should he go? 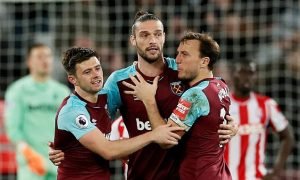 Hammers striker Andy Carroll proved last night he has still got what it takes when fit.

He came on to save West Ham a point and more importantly deny Stoke two points after coming on as a late sub in the closing minutes of the game.

Carroll scored within six minutes of coming on and was unlucky not to have been awarded a penalty to win the game for the Hammers in his brief cameo role.

He has now scored three goals from three games this year with just 15 League and Cup appearances for the season to his name.

In our latest ClaretandHugh poll, we ask whether we should sell Carroll if a decent offer comes in this summer or whether we should hold on the striker in the last year of his contract for situations just like last night.

← Carroll puts himself back on the market!
MIke on Mon… err Tuesday, with all things Irons →
Click Here for Comments >

4 comments on “Poll: Andy Carroll: Should he stay or should he go?”