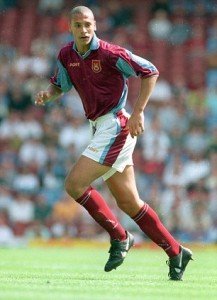 Rio Ferdinand has been voted the Irons’ best defender since the Premier League started back in 1992.

A Claret and Hugh poll posed the question and although the poll of nearly 700 was smaller than those previously given the current difficult situation the central defender was way out in front.

Julian Dicks was in third place with 16.8 per cent of the vote and 109 votes with James Collins in fourth with 12.63 and Winston Reid fifth with 3.24 per cent.