Posted by Sean Whetstone on May 29, 2017 in Videos, Whispers 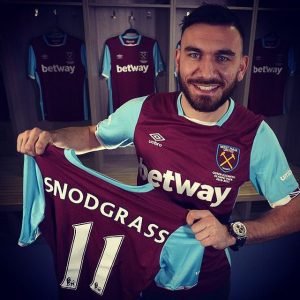 Robert Snodgrass is reportedly wanted by newly promoted Brighton & Hove Albion who are said to be considering a £8million bid for the West Ham winger.

The 29-year-old moved to the London Stadium in January for £10.2 million after impressing for Hull City in the first part of the season. However, he has failed to replicate his Hull City form and has quickly found himself on the bench. He joined Hull from Norwich in 2014 for a fee in excess of £6m.

Snodgrass has yet to score despite making two assists for Slaven Bilic’s side and he has spent the majority of his fifteen games for the club on the substitutes’ bench.

Our Bank Holiday Monday poll asks whether we should sell Snodgrass or stick by him?