Poll: What are your plans this Saturday? 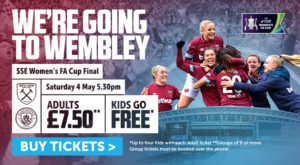 West Ham play Southampton in the final home Premier League game of the season at 3 pm at the London Stadium this Saturday with West Ham women playing Manchester City women at Wembley Stadium in the Women’s FA Cup Final at 5.30pm.

West Ham Women managing director Jack Sullivan has revealed that West Ham has sold over 4,000 for the Wembley final with another 60,000 sell out game expected at the London Stadium.

The request to move the Southampton fell on deaf ears with the Premier League despite Manchester City having their game moved to Monday.

According to social media, some West Ham supporters are still determined to watch both with some planning to leave at half time at the London Stadium to travel to north London for the Wembley final.

In today’s Claret and Hugh poll we ask whether you plan to make the Southampton game, go to Wembley or leave at half time at the London Stadium and make both games or whether you will just watch from home.