Poll: Which German club will you adopt on Saturday? 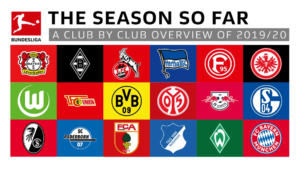 Football returns this Saturday and Sunday in Germany as the Bundesliga kicks off again.

This afternoon we published West Ham connections to Bundesliga clubs which can be read at https://www.claretandhugh.info/football-is-back-this-saturday-which-club-to-follow/

In today’s Claret and Hugh poll we ask you which German club you will be supporting or adopting this weekend while the absence of Premier League football continues.

Sean will be supporting Bayern Munich after he visited the Allianz stadium while on a stag weekend in Munich a few years back which Hugh will bee cheering on Frankfurt because of the Seb Haller connection.

← Football is back this Saturday! Which club to follow
Exclusive: Irons squad set to face problems →
Click Here for Comments >

One comment on “Poll: Which German club will you adopt on Saturday?”