Poll: Who is your Hammer of the year? 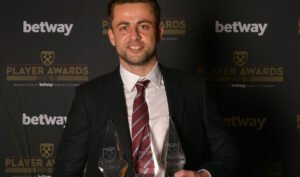 With the end of the Premier League fast approaching in eleven days we ask you to vote for Claret and Hugh’s Hammer of the year.

The 2019/20  West Ham Player Awards were due to take place on Tuesday 5 May 2020 at the  5-star JW Marriott Grosvenor House on London’s Park Lane but were cancelled due to the pandemic. The VIP awards were planning to honour the 40th anniversary of the 1980 FA Cup win and present the Lifetime Achievement Award while revealing the identity of the 2019/20 Betway Hammer of the Year.

The club is yet to announce whether they will hold virtual player awards this and when official voting for Hammer of the year will start.

Before football was suspended Angelo Ogbonna was the fans favourite for the award followed by Declan Rice and Robert Snodgrass.

Since then Michail Antonio stock has increased after scoring six goals in July and four in one game.

So today we ask you again who is your Hammer of the year considering the whole season?

← West Ham goal hero has his tyres slashed
Where did it all go wrong? →
Click Here for Comments >

One comment on “Poll: Who is your Hammer of the year?”