Poll: Will West Ham win, lose or draw against the Baggies? 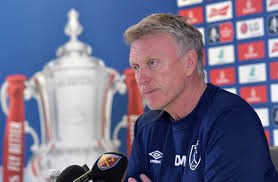 This is the 10th FA Cup meeting between West Ham and West Brom, with the most recent in February 2015 in the fifth round, a 4-0 win for Albion.

West Brom have won none of their past nine away matches against West Ham (D6 L3), all in the Premier League between 2005 and 2018.

West Ham haven’t lost a home FA Cup match against a team from outside the Premier League since January 1997, a 1-0 defeat by Wrexham; they are unbeaten in 12 since (W10 D2), winning the last eight in a row.

West Brom manager Slaven Bilic hasn’t managed a game against West Ham since leaving the club in November 2017 – his only previous FA Cup match at London Stadium was as Hammers boss in January 2017, a 5-0 defeat by Manchester City.

One comment on “Poll: Will West Ham win, lose or draw against the Baggies?”