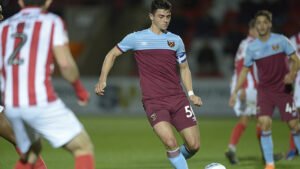 West Ham under 23s skipper Joe Powell has told the  squad beaten by Cheltenham there were positives to take from the game.

“In this game especially, we were playing against an experienced team in League Two,” he said. “I tried to apply my experience and share it out with the team.

Powell has ten appearances in League Two to his name, having spent the second half of last season on loan at Northampton Town, and was pleased to offer that experience to help his younger teammates when possible on Tuesday.

He said: “I’ve tried to do it throughout the season really, in every game, but we were just unfortunate that we didn’t get the win (against Cheltenham).

“As a team and individuals, people made their mistakes, but there were positives to take. Many of us, especially the older boys, tried to help out the younger boys, and there were moments of excellence given from everyone.”

It ended the team’s unbeaten run of 16 but  new coach Dmitri Halajko, Powell saying: “Every team has to lose at some point. Nobody goes through their career just winning, winning, winning,” he observed.