Poyet to return to Addicks?

Posted by Sean Whetstone on January 3, 2016 in News, Whispers 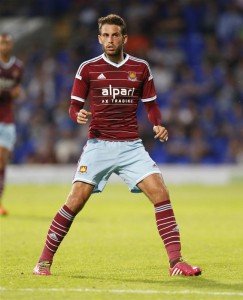 A report in the Sevenoaks Chronicle suggests Charlton Athletic are believed to be close to re-signing former midfielder Diego Poyet on loan from West Ham. Poyet, who came through the Addicks’ academy system, left The Valley after winning their Player of the Year award. The youngster has been on loan at Milton Keynes Dons this season but has hardly featured and now Charlton are set to offer him first team football, as they bid to move away from the relegation zone.

Yesterday MK Dons manager, Karl Robinson revealed the midfielder is returning to West Ham as he is too similar in style to vice-captain Darren Potter. “As a combination they didn’t do too well together and he knows what Darren Potter means to my football club. It’s not fair on a young player to not give him many minutes and in time he will be a much better player than a lot in this league. He’s a tremendous young man.”

Poyet featured in five of our Europa League ties before joining the Dons on what was supposed to be a season long loan at MK Stadium. Poyet joined West Ham on 8th July 2014, signing a four-year contract with West Ham after reaching a settlement for compensation with Charlton.

← New generation discovers the West Ham Way
DG: Slaven has something special with the fans →
Click Here for Comments >