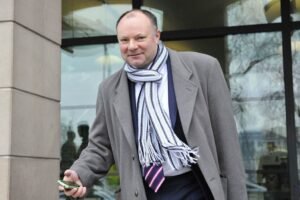 The Premier League have appointed Gary Hoffman as its new chair.

It was the only item on the agenda today as the chairmen met by video conference as the world health crisis continues to dominates football’s agenda.

He could hardly have taken over his new job at a more difficult time with the game struggling to get onto its knees never mind its feet.

The investment banker will work with  chief executive Richard Masters when beginning his role on June 1. Shareholders voted unanimously in favour of the appointment.

A source told ClaretandHugh: There was nothing else discussed today but clearly Gary is walking into the job at the most difficult time in the League’s history.

THere was nothing else discussed at today’s meeting as there is no way forward on the return of the season until the government gives new guidelines perhaps on May 7.

Hoffman, chairman of the Coventry Building Society and Monzo Bank, earlier served notice of his intention to resign as non-executive chair of Hastings Group Holdings before taking up the new role.

The former chairman of the Football Foundation, who began his career at Barclays and was a chairman of Visa Europe, succeeds acting chair Claudia Arney.

Hoffman said: “Football has been central to my life as a fan, an administrator and in my business career, so it is an honour to join the Premier League as Chair.”
Now he has to face up to a situation hitherto unseen anywhere in the world with even the fans entirely split on whether the game should make a return under any circumstances.
Its a huge test of the man but his background in finance will encourage people to believe that he has the where with all to come to terms with the cash problems it is set to face.
Permalink