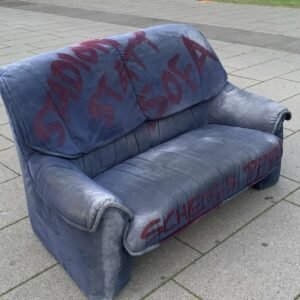 A sofa has been placed at FC Köln’s stadium. in Germany with an English slogan which read: “Stadium instead of sofa! Against ghost games!”  Many German supporters are against the return of the Bundesliga behind closed doors suggesting that football is about the fans.

Germany has been beset with protests in general aimed at strict lockdown measures but this weekend the focus was on football.

In another protest, posters were plastered across Cologne imitating #Effzeh’s adverts: “Money matters more to us than your health!”

Some German supporters believe it is too soon for football to return and instead would prefer football and supporters to return together when it is safe.

English supporters got their first taste of what the Premier League might look like today with eerily empty stadia with players shouts echoing.

Substitutes sat in chairs two metres apart wearing masks while they colleagues on the pitch ran around and tackled mask free.

← Football’s back to a deafening silence, masks, disinfected balls, bumps not hugs and subs at a distance
Video: The Billy Bonds Story →
Click Here for Comments >