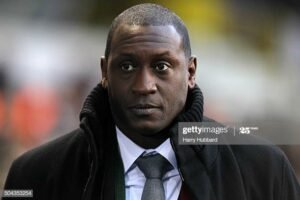 He has joined a growing lobby of opinion which appears to feel that Norwich City, Aston Villa and Bournemouth are the clubs looking at a slide into the Championship.

From a very gloomy restart against Wolves and Spuds the Irons have turned things round with four points from the  last two games.

And with a run-in which looks more comfortable than any of the threatened clubs around them, the Hammers are now seemingly on their way out of trouble according to Heskey.

Despite a natural anxiety until the job is finally done it’s hard to disagree with him given a four point gap between us  Villa and Bournemouth and the Irons having a near extra point via a far better goal difference.

Heskey now has little doubt it seems on who is going down and told BBC Radio 5 Live: “I can’t see either Aston Villa or Bournemouth winning another game.

“Villa and Bournemouth’s run-ins are much harder than West Ham and Watford’s. Watford manager Nigel Pearson has been in this position before with Leicester and got them out of it, so he knows what it takes and what his squad have to do.”