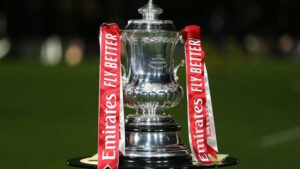 West Ham’s fourth round FA Cup Tie against Derby County will go ahead on Monday 30 January at 7.45pm.

The game will be screened live in the UK by ITV4 and ITVX, and across the world by the FA’s international broadcast partners.

The Hammers will take on the Rams, currently fourth in EFL League One, after a 1-0 third-round victory at Premier League rivals Brentford at the Gtech Community Stadium when former Bees winger Saïd Benrahma scoring the winner with a spectacular second-half strike.

Derby defeated Torquay United, Newport County and Barnsley to take their place in the fourth round.

The Rams are on a 16-match unbeaten run in all competitions as they seek an immediate promotion back to the Championship and also pushed Liverpool to a penalty shootout at Anfield in the EFL Cup third round in October.

This will be just the second FA Cup meeting between the two clubs, exactly 100 years after the first!

West Ham defeated Derby 5-2 in the semi-final at Stamford Bridge in March 1923 to secure a place in the first-ever final held at Wembley Stadium, with Billy Brown and Billy Moore each scoring two goals in front of a 50,795-strong crowd.

Ticket details for this season’s fourth-round tie will be announced in due course.

The final of the 2022/23 FA Cup will be played at Wembley Stadium on Saturday 3 June.

← Moyes pleads for patience when it’s not QUITE so good!
Moyes makes mystery of Dawson missing Wolves clash →
Click Here for Comments >