Randolph sees only positives on his return 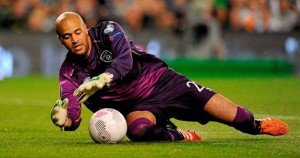 Darren Randolph made his Hammers return against Everton and whilst being rarely troubled showed that he is a decent upgrade on Roberto Jiminez and David Martin.

There was nothing much to bother the Ireland international but afterwards he seemed pretty content on his re-apperance following his spell at Middlesbrough.

At around £4 million – despite the complaints of some knockers – he’s a very decent second string and at least this one position we no longer need to worry about.

He looks likely to be between the sticks again for next weekend’s FA Cup fourth round clash against Slaven Bilic’s West Bromwich Albion.

I’m certainly not among those who would question his return and feel confident that all is well at the back with his return as No 2 to Lukasz Fabianski.

The Polish international is expected to be back for the match against Liverpool on February 1 although with Randolph now on board the medics may decide not to rush him back.

Commenting to the BBC  after the game he said: “There were lots of positives to build on. We were very solid and we limited their chances. We created a lot of chances in the first half. We are disappointed not to get the win.”

“I am very happy to be back. I got a great reaction form the fans which was really nice. I was hoping to come back to a win but we have lots of positives and lots to build on. We now need to recover from today and go one game at a time.”

“I have only been here two days but I am looking forward to working with David Moyes. Everyone speaks very highly of him.”

One comment on “Randolph sees only positives on his return”