Posted by Sean Whetstone on October 20, 2019 in News, Whispers 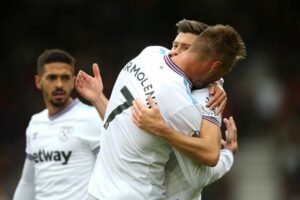 Manuel Pellegrini announced two changes to yesterday’s starting lineup when Aaron Cresswell and Andriy Yamolenko were left out in and replaced by Arthur Masuaku and Pablo Fornals.

Aaron Cresswell suffered a knock against Crystal Palace but on Thursday’s press conference the manager insisted he had no fresh injury concerns except for the long term injuries of Fabianski, Reid and Antonio. It now appears he was being economical with the truth with Cresswell missing some training this week.  If he was playing mind games with Everton he didn’t work with Masuaku not having his best of games for the Hammers.  Cresswell is expected to have a full week of training in the coming week and be fit again for the Sheffield United home game at the London Stadium.

Andriy Yamolenko was rested on the bench by the manager after two international games for Ukraine and came on in the second half when things started to go against us. The decision not to start Yarmolenko was a strange one given his current great form and the fact that Masuaku had played two full games on International duty but was deemed fit to play.