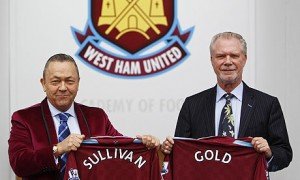 West Ham accounts released this week show a record turnover of close to £115m, an increase of nearly £25m and a record profit on paper of £10.3m after many years of losses.

The figures are impressive on paper but it doesn’t alter the fact that the Hammers are massively in debt although it is now under control.

Despite the £10m profit Chairmen Gold and Sullivan injected another £3.5m of cash in shareholders loans to bring the total they have loaned the club to close to £50m.

Although external and bank debt has reduced significantly the shareholders have taken the debt burden including refinancing the bank debt which the Icelandic’s and David Sullivan took on personally.

A trusted source told Claret and Hugh “To reduce the debt from £110m to £70m you have to make £40m profit somewhere/some years.

“We lost £30m the year where we were in the championship and we’ve spend money improving or trying to improve the team, rather than running West Ham United like an accountant would run it.”

← Zarate: It was always going to end in tears
Nolan contract clause 100 per cent FALSE →
Click Here for Comments >

2 comments on “Record turnover/record profit but still in debt”