Recovered DG back and looking for a win 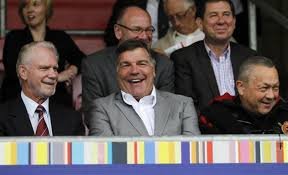 David Gold – like the rest of us -believes we could see a return to the free flowing football of early season as the Hammers set to receive Swansea this afternoon.

With Sam Allardyce admitting that he has his players back, Gold is excited at the prospect of being back in the director’s box after suffering a winter bug.

He told ClaretandHugh: “With so many injuries we have had to change the brand a bit and became quite physical but apart from Everton have managed to grind out results while not playing at our best – that is a VERY encouraging sign.”

Gold is an admirer of Swansea boss manager Gary Monk who has fitted seamlessly into the gap left behind from Michael Laudrup’s sacking last season spoon after the controversial Upton Park clash when Andy Carroll was sent off.

He said: “It’s great to see and you have to admire what he’s done down there but we are a very fine side this season with pace and power in our team and are showing how hard we are to beat when at our best.

“I don’t know what team Sam Allardyce will pick – he will have studied Swansea very closely and will have seen strengths and weaknesses and who should be on who.

“Doubtless a hundred teams or more will be selected around the pubs before the game but with the players we have back and the tremendous spriit we have inside Upton Park at the moment it’s going to be a great afternoon and I’m glad to be back.”

← Sam reckons a new deal’s on the way
Sam: “Give us a break” →
Click Here for Comments >