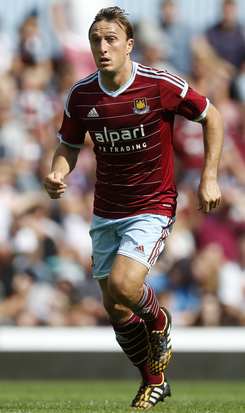 Harry Redknapp has this evening paid tribute to Mark Noble declaring: “The boy is claret and blue through and through  – I don’t believe he will ever leave the club.”

Speaking to ClaretandHugh exclusively, Redknapp  paid tribute to the Canning Town-born Hammer and explained why no club had ever made a serious move for him.

Redknapp-managed Queens Park Rangers arrive at Upton Park on Sunday with Noble facing a fitness race on his shin/calf problem.

But the former Hammers boss was keen to pay tribute to a player for whom he says he has always had a great admiration.

He said: “Mark is a throwback to the days when club loyalty was everything and it’s really refreshing to see.

“People have often wondered and asked why no club has come in for such a good player but the answer is obvious, he’s a Hammer to his backbone.

“I believe at one time I was told there was some interest from  Fulham but I just don’t see it happening.

“For me he’s a top player. I have a lot of admiration for him and his game. I can’t ever see him moving on.”

← Drop Tomkins? No, he’s been punished enough
The return of Rio →
Click Here for Comments >